Tracking the NBA off-season as a Wizards fan is a horrible way to waste the summer. While fans of rival teams get to debate whether they won the big trade and brag about their marquee signings, the high points of our summer are borderline satirical press conferences introducing players that haven’t moved the needle for three-plus years.

Considering the low benchmark set over summers past, most Wizards fans weren’t too surprised by this off-season’s underwhelming moves – we’ve come to grips with the fact that Ernie will only ever acquire a key piece if a no-brainer draft pick falls in his lap. What was curious, however, was that our personnel moves seemingly failed to add one thing that’s been glaringly missing from this squad: an identity. 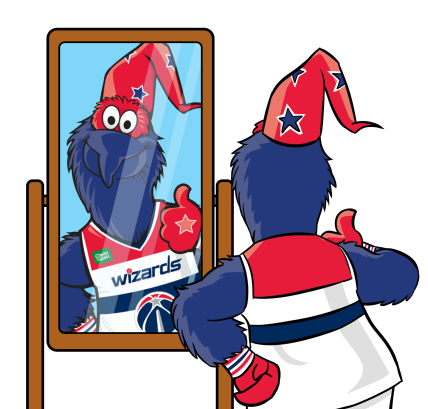 Every team with title aspirations plays with an understanding of what they do well and what their approach to winning will be. The Rockets fire up either a layup or a three in 7 seconds or less, the Celtics are stocked with lengthy wing defenders, and the Warriors start five All-NBA players. The Wizards, on the other hand, slogged through last season unsure of who they were and how they wanted to attack. Are they a bad good team or a good bad team? Great question. Are they three-point shooters? No. A fast-break team? Not really. Hard-nosed defenders? F*** no!

The Road to Self-Discovery

So, while on paper the team should improve by replacing Gortat with the center he used to come off the bench for, and substituting Jodie Meeks with literally anybody, it was disappointing that those additions didn’t readily clarify the team’s strategy going forward. What transformational skill-sets do Austin Rivers and Dwight Howard provide other than making fans feel icky about rooting for the players on their team? What new dimension was added aside from the looming possibility that these fiery personalities will combust an already-volatile locker room? The short and obvious answer is … nothing.

Aside from some new window dressing, the Wizards executives are running it back with more or less the same team that underperformed all last year – at least at first glance. When you take a step back, however, you’ll see that these personnel decisions add up to more than a simple cosmetic cover-up. Instead, they fit a well-established pattern, one that has become so entrenched in how this organization does business that it’s time to admit it’s become a core element of how this franchise operates. The Wizards didn’t find their next great superstar this summer, but they did discover their one true identity: the most unlikable team in the NBA.

Soul Searching – How Did We Get This Way?

Culture is established at the upper echelons of an organization, from where it filters down through the ranks. Where the head goes, the body follows. Near the top of the Wizards organization is Ernie Grunfeld, the most irredeemable and unapologetically incompetent figure in Washington sports. The only man above him on the executive ladder is Ted Leonsis, whose NBA resume includes entire sections dedicated to trolling bloggers, endlessly raising ticket prices, and refusing to fire Ernie Grunfeld. Together, this tandem has frustrated their fans for years. If you were required to describe the pair in a single word, you’d be hard pressed to find a better adjective than “unlikeable.” Is it any surprise, then, that after a decade-plus under Ted and Ernie’s stewardship, that this franchise has been exactly that?

If the Roster Fits..

Perhaps it’s a bit harsh to our players to label them as the most undesirable collection of talent in the league. It’s pretty incredible though, once you start to think about the team in this context, how well this roster lends itself to such a scheme. Suddenly, everybody’s role makes sense in a way that it never quite has before. Don’t believe it? Take a look for yourself:

John Wall – John is the preeminent disgruntled All-Star. Who else grumbles as much about what other guys are getting paid, or the fact that he doesn’t get billboards, or that his 2K rating doesn’t meet his expectations? This mean-mugging, gang-sign throwing, spoon-feeding Point God is the anti-Kyrie; the star that hasn’t received his due and isn’t afraid to let everyone know it.

Bradley Beal – With the divisive Wall taking so much flack by himself, you’d think Beal would be universally revered. Instead, he’s taken his fair share of heat for bold comments, poor leadership, and selfish late game play. Then, with John out, he showed he could take the lead on starting drama by starting the “Everybody eats” controversy.

Markieff Morris – Kief, already one of the most T-ed up players in the league, says he needs to add even more “bully ball” to his game. What more needs to be said here?

Otto Porter – Otto is somehow simultaneously the quietest person on team and the most unliked by the team’s stars. With his huge contract, he also creates more disagreement among fans than anyone else on the squad.

Dwight Howard – Dwight is, without doubt, the most hated player in the NBA. Playing on his sixth team in eight years, is there anyone in the league – players, coaches, media, refs – with something good to say about this locker room cancer? Not to mention, Dwight led the league in technical fouls by a wide margin. This addition is the one that pushes the Wizards to the extreme on the unlikability scale.

Austin Rivers – First Rivers incited the entire Houston Rockets to hunt him down in the underbelly of the Staples Center. Then, his own father gave up on him and shipped him out of town. Ouch, this guy must suck to be around.

Kelly Oubre Jr. – Kelly went up against the notoriously dirty Kelly Olynyk in the 2017 playoffs and somehow managed to come out as the less-likable Kelly O.

Tomas Santoransky – It was hard to find much to fault Tomas for last season. He made key contributions and always had a great attitude. In fact, he might’ve been the most likable guy on the team. Maybe that explains why he dropped out of the rotation come playoff time.

Ian Mahinmi – Mahinmi actually seems like a really nice guy – he’s always flashing his big smile, he gives back to the community, he dresses well. Regardless of all this, he’ll always be hated by Wizards fans for suckering Ernie into giving him the worst contract in Wizards history.

Jason Smith – Jason is constantly heralded as one of the best teammates in the NBA. Obviously, he therefore never plays.

Be Who You Are and Be It Well

Having established that Wizards are ready to be the most unlikable team in the NBA, is this transformation something we as fans should actually be rooting for? If the alternative is to continue slogging on as a faceless and toothless underachiever, then yes, absolutely.

The Wizards had a maddeningly uneven year last season – overperforming when they should’ve been overmatched, but then dropping countless games to inferior opponents. A big portion of that inconsistency can be attributed to the team’s identity crisis. The squad’s approach and source of motivation changed from game to game and consequently their intensity level and production fluctuated as well. A commitment to being unlikable may not be the tactic that yields the most feel-good storylines or aesthetically-pleasing basketball, but at least it is a defined tactic.

The Wizards’ record should be markedly better this year simply by virtue of eliminating the emotional instability and role confusion that sprouted from a lack of self-awareness and led to many of last season’s worst losses. From there, it’s not too hard to envision how this newfound identity will translate to a team mentality and style of play that generates more wins:

In all likelihood, there was nothing strategic or deliberate about the front office assembling the repugnant cast of characters into a team. Still, they appear to recognize what they’ve stumbled upon and are excited about how it will play out for the upcoming season.

On the other hand, it remains to be seen whether the fan base will get behind this new-attitude team. There’s a very real chance that this experiment goes south quickly. That being said, if the Wizards fully embody this identity of being the most unlikable team in the league, they’ll surely give the fans something to like.

wizzzkidd21 I'm just a Wizards fan looking to rep my team, interact with other fans, and help build up the fan base. In my day job I'm a recent MBA grad from UMD, working in management consulting.
Published August 18, 2018