Sports rivalries are awesome. Along with fantasy sports, there’s nothing better at squeezing maximum intrigue into every facet of following a sport. Every minor off-season transaction, every player Instagram/ Twitter post, every normally routine regular season game takes on infinitely more meaning when viewed in the context of the bitter and sometimes petty history between two teams and fan bases that don’t like each other. Rivalries make sports more fun. 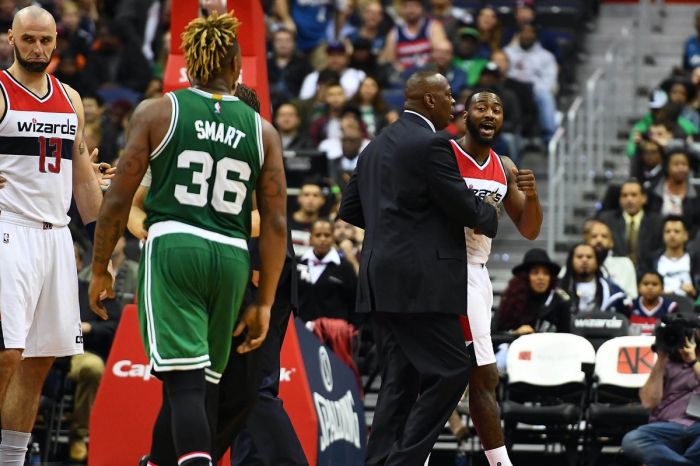 That’s why it has been such a shame that the Washington Wizards have not had a proper rival for most of the past three decades. They’ve had no team to benchmark themselves against, no fan base to mercilessly shit-talk on the Internet, no squad to throw chippy screens and unnecessarily hard fouls at, nobody to enjoy playing spoiler to, and nobody to dress up in all black for before a game in February. And that’s why it was so awesome last season when the vitriol between the Wizards and Celtics emerged seemingly out of nowhere and a true rivalry bloomed right before our eyes.

Last night, the two sides of another Eastern Conference rivalry came to terms on a blockbuster trade that swapped All-Star point guards, role players, and a lottery pick. I’ll leave it up to blogs of those teams to determine who won the trade or to give us an in-depth analysis of who would be favored in a potential playoff series between the two teams. I’m only interested in the trade for what it means for the Washington Wizards. And since the reshuffling doesn’t appear to make either team demonstrably better or worse for the upcoming season, my major takeaway is this: this trade confirms that the Boston Celtics are primed to be the Washington Wizards closest rival for this year and into the future.

It’s pretty obvious at this point that Danny Ainge’s entire off-season strategy has been centered on such a rivalry deconstruction. No doubt, he’s seen John Wall’s off-season workout videos and is terrified about facing a vengeful gang-sign John Wall now that he’ll be conditioned to ball out all the way through a seven game series. Once his secret weapon, Wiz-Killer Kelly “KO” Olynyk, left for Miami, Ainge clearly decided his best bet to avoid the wrath of Deathrow DC was to rid the roster of as many figures of the Wiz-Celtics rivalry as he could. He already moved Avery Bradley and now he’s trading away Isaiah Thomas and Jae Crowder in an attempt to disguise his team as different from the one that inspires so much ire from the WizKids. Heck, even signed a Markieff Morris lookalike to confuse the Wizards and throw them off his trail.

Unfortunately for Ainge, his thinly-veiled plan has been executed in vain. The reason this rivalry formula won’t hold for Wiz-Celtics is that John Wall is a man who holds grudges. Just like was the case with Atlanta, it won’t matter that most of the rival’s roster has turned over, he’ll still be bitter about getting eliminated from this year’s playoffs and he’ll be out for revenge. As Dennis Schroeder saw, it only takes one roster holdover with a horrible haircut to set John Wall off. Unless Ainge can unload Marcus Smart before the season or cut his hair, all of 2017-2018 is going to be Wolf Season with John Wall hunting for Celtic-green blood all year long.

Vying to Fill the Power Vacuum

If there’s another reason that people will claim the Wizards vs. Celtics is done as an ongoing rivalry, its that Boston fans will claim this trade elevates their team to a level where feuding with Washington is beneath them and where their only valid rivals are from Cleveland. Of course, the Lebron-Kyrie, GOAT-little brother dynamic gives Cavs-Celtics an interesting Shakespearean aspect, but Lebron hasn’t had a rival in the Eastern Conference since the first time he ditched Cleveland. So until someone does beat him, which a Kyrie-led team could never do, the King isn’t going to have a rival in his conference any time soon unless he decides to go West.

That means that the highest-stake competition that can exist in the East for the time being is that for the title of Number 1 contender, a crown the Celtics and Wizards are favorites to vie for. To become the top-dog you have to win the right to play for it, and with a bunch of young stars vying to establish their own legacies, you can bet it’s going to be a testy battle. The kind of legacy-building that’s up from grabs is sure to produce the animosity,

In less educated basketball circles, Kyrie vs. John Wall is an actual debate that people have. Well now that Kyrie no longer has Lebron to rely on to carry him to the Finals (or the playoffs for that matter), we’ll actually get a chance to watch John put an end to that debate on court. Honestly, there are so many aspects of this individual rivalry that make it great: two number 1 draft picks, the fight for top PG in the East and the accompanying All-NBA/All-Star spots, Kentucky vs. Duke, John’s Team USA and sneaker endorsement snubs, Kyrie saying he wanted his own team like John, John saying he couldn’t imagine wanting out of a team that went to the Finals 3 straight years. You couldn’t ask for a juicier 1-on-1 matchup.

Depending on who you ask, it’s probably a toss up for which of these stars is currently more highly regarded among basketball fans. John plays defense, Kyrie can shoot better. Kyrie has a ring, John has led a team on his own. With Kyrie out of Lebron’s shadow and finally expected to produce wins on his own, the next five seasons will settle this debate once and for all. In all likelihood, the final verdict will come down to head-to-head matchups in the playoffs between the Wizards and the Celtics.

So there you have it. In terms of its impact on the Eastern Conference over the next half decade, this trade wasn’t so much about Cavs-Celtics as it was about Wiz-Celtics. These two teams were already primed to jockey over the status of conference leader over the next few seasons, and this trade only intensifies that battle.

If you think the real ECF rivalry is Cavs-Celtics, you’re wrong. If you think John Wall vs. Kyrie for best guard in the conference isn’t going to be epic, you’re wrong. If you’re here to read why the Cavs got the better end of this deal, you made you’re way to the wrong blog. The Wizards-Celtics rivalry is here to stay, and I for one can’t wait to kick some Boston Lucky Charms ass!

One thought on “Takeaway For Wizards From NBA Blockbuster: Wiz-Celtics is the Rivalry of Now and the Future”