Earlier today, the Washington Wizards held a press conference to formally announce the signing of All-NBA guard and franchise cornerstone John Wall to a supermax extension that locks him in as the foundational piece of DC professional basketball through at least the 2021-2022 season. With no disrespect to running mate Otto Porter, the Wall news was the marquee free-agency headline and the one that re-energized Wizards fans’ title aspirations in an otherwise uneventful and borderline disappointing summer.

It can’t be understated how monumental (no pun intended) signing the WallStar to that extension was for this team.  We’ve seen a franchise cupcake use free agency to join the biggest bandwagon in sports (KD), another perennial star traded for nickels on the dollar before the get the chance to leave (PG13), and on the very same day that the Wall news broke, a more-hyped but less-talented point demand an exit from the situation that gift-wrapped him a ring and three straight trips to the Finals (the flat-earther from Duke).

A similar exit by John Wall would’ve had far more devastating effects on the franchise that drafted him. When you have a shallow roster and a GM who’s best move was lucking into the #1 pick after a season of unintentional tanking, it’s a safe bet your team is going to be pretty miserable for years to come if you lose that #1 guy. That’s why Wizards twitter was getting anxious when John didn’t sign the extension right away and we were forced to endure a litany of hypothetical trade proposals and Wall2LA conspiracy theories from obnoxious Celtics fans. Personally, the thought of this team without it’s WallStar was enough to send me into a miniature existential identity-crisis that forced me to fathom a future where I no longer pledged allegiance to the #DCFamily.  Fortunately for me and all the Wizards faithful, John quelled all the doubts and proved his commitment to the city by signing on to lead this team for the foreseeable future.

In his press conference today, John said a bunch of things that he’s said before, but that we were still more than happy to hear him affirm: “This is the team I want to be with for the rest of my career and I won’t stop until we get to hang a banner in the rafters.” With John in the fold for the long-term, and Eastern Conference rivals on the decline, us Wizards fans are for the first time feeling confident enough to consider that a championship in the nation’s capital could be a realistic possibility. Considering where this team was before the franchise savior arrived, the $170M Ted Leonsis will be paying over the life of the extension to retain his point god might be a steal.

This week, another Wizards blog wrote a piece chronicling the Wizards journey over the last ten years. It was a good piece, but it could have been summed up quicker. The Wizards sucked, they lucked into John Wall, John got better every year while making his teammates better each year, Wall helped establish the Wizards as a contender, John Wall kept Wizards championship hopes alive into the future by signing his supermax extension.

I know I’m coming off as a John Wall fanboy, but at this point it’s impossible to be a Wizards fan and not be. That isn’t a bad thing; there are much worse people to rep than a guy that shows loyalty, gives back to his community, and puts the city on his back. Today’s press conference was a celebration of that: a four year extension of the privilege to don jerseys with the number 2 stitched on the back, to hashtag tweets with #WallStar and #WallWay, to chant “MVP” at the Verizon/Capitol One Center, to enjoy and be proud of D.C. basketball.

Today, John Wall solidified his commitment to bring another Larry O’brien trophy to D.C. The only question that still remains as pertains to John Wall’s legacy in the district is where is his goddamn billboard?

Back in early 2016, John was feeling under appreciated and marveled at the lack of exposure he was getting. “I was everywhere (in Kentucky),” Wall said. “I ain’t got no billboards in D.C.” Well, Ted Leonsis, can you please give this man the billboard he wants? 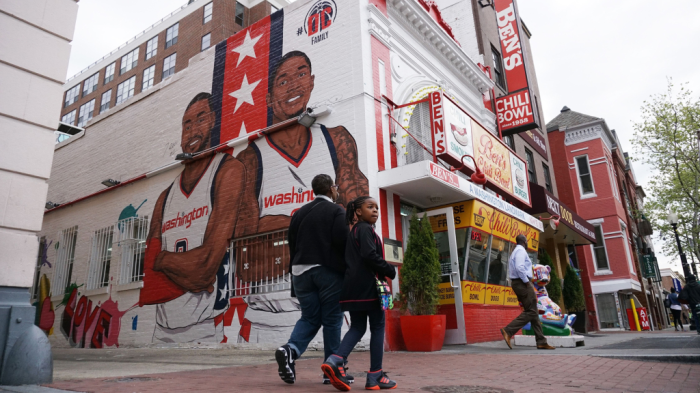 The temporary mural he shared with during the playoffs with backcourt mate Bradley Beal was nice, but I think we can all agree he needs something a bit more permanent. How much can a billboard possibly cost? Doesn’t the Verizon Center have space on an external wall that can be spared to honor the player that dominates inside the building? Shouldn’t the Verizon center just be named the John Wall center and turned into one giant billboard? Shit, John Wall needs five billboards, one for each All-Star appearance. Plaster his face on the Washington Monument, and then update the alternative logo to match. Come on Ted, get the man his billboard.

John Wall gives the team the cache to get media attention and nationally televised games.  He produced the most memorably triumphant playoff moment in the last 40 years of the franchise. He already has the franchise record for assists and steals, and by the time his extension expires he’ll probably also be the leader in points, and regular season games played. The man could retire today and go down as the best player in team history.

Now, somebody get this man his goddamn billboard already.