As a huge Wizards fan, I was quite discouraged to hear that one of the reasons Kevin Durant never considered DC as a viable free agency destination was that he felt the team lacked fan support.  Of course, there is a very obvious person to blame for the team’s failures in the free agency market.  Still, KD’s reported sentiments strike an insecurity that all true Wizards fans have: that our fanbase is pretty weak.  The Verizon Center is routinely half-empty, our franchise player is chronically underappreciated, and the fans themselves are often regrettably apathetic.  It seems you can’t go to a game and cheer for the Wizards without having to yell over a contingency of fans from the road team.  Nights like Kobe’s final game in DC highlight this unfortunate reality, and the home record speaks to the lack of any realized home-court advantage.

As tempting as it may be, nothing will get solved by wallowing in self-pity or hunting for a culprit to blame.  Instead, we should be productive and proactive in rebuilding the culture around being a Wizards fan.  We have to take it upon ourselves to foster the growth of this fanbase into one that free agents want to play for and opponents are scared to play against.  In that spirit, here are some strategies that Ted Leonsis and the core group of passionate Wizards fans can employ to build a stronger fanbase: 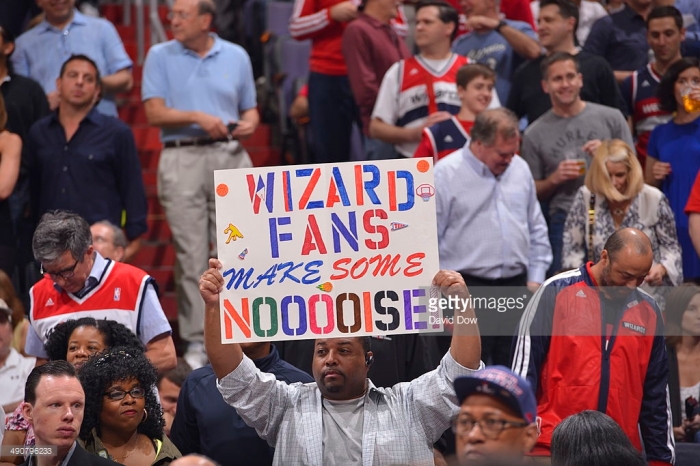 Appropriate Season Ticket Prices: Okay, so this one is squarely on Ted.  Perhaps the most important variable in determining how many Wizards fans fill the arena is the price of season tickets.  And recently, season tickets prices have risen to levels that are clearly above market value.  After my first season as a ticket holder, I saw that the price increases following the 2015 season resulted in many of my fellow Section-117 plan holders opting not to renew.  After the most recent price hikes, even I couldn’t justify buying a season’s worth of tickets from Monumental when I could get individual game tickets on secondary markets for a fraction of cost.  Based on how many times Monumental extended my renewal deadline, I have a hunch that there will be a more dramatic drop in season ticket holders this upcoming season. Obviously, this attrition means that many of the most tenured and ardent fans are going to be replaced with more empty seats, or worse, bandwagoners in Cavs or Warriors jerseys.

Of course, Ted is running a business and he has to make money.  The marginal success the team has experienced over the past few years and the growing popularity of the league overall certainly justify some increase in ticket prices.   But prices above market value are hard to justify, especially when they come at the cost of lower attendance by the team’s most enthusiastic fans.  Ted, who has a vested interest in maintaining a base of loyal, repeat customers, should meet season ticket holders halfway.  Fair prices will allow more devoted Wizards fans to come more games, creating a better atmosphere in the stadium.  This will help develop a home-court advantage that results in a better team, which will drive fan interest, which will ultimately yield more demand for Wizards tickets.  In the end everyone benefits: Leonsis, the players, and the fans.  But it all starts with Ted setting the season ticket prices back at an appropriate level.

Special Cheering Group/Sections:  One of my biggest gripes against Wizards fans is that as a group we’re very subdued.  John Wall infamously commented that the fans seem to get more excited about free chicken sandwiches than they do about a win.  And if you are somebody who likes to cheer loudly and heckle the opposing team (me), quite often you’ll find yourself the recipient of reproaching glances from your neighbors.  We need to redefine the code of etiquette for attending a Wizards basketball game.  To do that, I propose starting a Designated Cheering Section.

This idea is not all unique; it comes from supporters of the University of Maryland Men’s Soccer team who started a fan club called The Crew.  The club started in 2003 with a small group of students who would sit behind the goal, loudly heckling the opposing goalie and raucously cheering on the home team.  The group quickly grew in size and sophistication, coordinating outfits and organizing chants.  The result has been a spike in interest in the team and a long standing reputation for one of the best home field advantages in college soccer.

We should bring this idea to the Verizon Center in the form of a few sections, preferably behind the basket, where fans are encouraged to cheer, yell, and heckle opposing players.  Obviously, fans are encouraged to do this all throughout the arena, but these sections would be reserved for the loudest, rowdiest, and most energetic fans.  Putting all these fans in the same section will allow them to feed off of each other’s energy, and also to coordinate chants and jeers.  These sections of boisterous fans will lead the rest of the arena in rooting for the team while teaching casual fans the proper way to cheer.

The Cheering Section would start small, but it will grow quickly as other fans see how much fun it is.  Passion is a contagious thing.  And once fans have yelled and screamed their support for the WizKids, they’ll probably find themselves more invested in the success of the team.  As the group of cheerleaders grows, signature chants, norms, and traditions are sure to develop and embed themselves in the culture of the team. Hopefully the end result is a more lively and intimidating home crowd and a few more Wizards wins at the Verizon Center.

Own the Wizard: I, like many of my fellow fans, think that “Wizards” is pretty silly moniker for a collection of world class athletes.  But I figure that if we’re not going to change the name back to the Bullets, then we might as well take ownership of the name that we do have.  That’s why my friend and I went to last season’s home opener on Halloween dressed as Wizards.  As in actual wizards; with hats and beards and a staff that got confiscated by security.  It was incredibly silly, but it was one of the best times I’ve had at a game.  I think the team should encourage more things like that.  We have a weird mascot, so let’s have fun with it.

For starts, every year the game that falls on or closest to Halloween has to be costume night, where everyone comes dressed up as their favorite Wizards.  This past year I was Gandalf, but let’s fill the stands with some Harry Potters and Hermione Grangers and Merlins, etc.  Bonus points for wearing a jersey over your costume.  Next, we should build out G-Wiz’s backstory.  He must be some sort of wizard, but what kind of powers does he have, what kind of quests has he been on, what the hell species is he?  Someone needs to answer these questions.  And one more suggestion: Since the NBA is making new alternate jerseys each year, can we get something wizard inspired?  Like maybe the team can warm up in hooded cloaks for a couple games.

Bandwagon Shaming: Among the worse symptoms of the Wizard’s underachievement this past decade is that we have a lot of bandwagon fans in DC.   It’s easy enough to understand where they’re coming from: they haven’t had a home team to root for in the NBA playoffs so they pick another team to support.  Still, it’s pretty lame when they just pick the best team to root for, and even more shameful when they’re rooting for those teams against the home squad.  We need to call these fugazi’s out.  We need to remind everyone that the only fans that get respect are loyal fans.  We need to shame the bandwagon fans clogging up the Verizon Center.

The Wizards were one of the first teams to get into bandwagon shaming, with the Bandwagon Cam on the jumbotron a few years ago.  I say let’s take this a step farther.  Let’s rig the nightly seat upgrade promotion so that a Warriors groupie wins, but then let’s upgrade them to the last row in the 400 section.   Let’s raise the stake on the Bandwagon Cam and show losers in Cavs jerseys on the jumbotron with the nerdy Snapchat filter.  Let’s send G-Wiz out into the stands to prank clowns wearing LA Clippers gear.  Or we can give a kid in a KD jersey a chance to play someone 1-on-1 for a prize, but then have him faceoff against one of our D-League players.  This may sound like a harsh way to treat these confused fans, but the truth is that we’ll be doing it for their own good.

-A Wizards branded sports bar near the Verizon Center that fans have a place to come for road games or before and after home games to kick it with other fans.  Maybe they can set it up so that every now and then players will roll through after the game to interact with fans.

-Let people send SnapChats to the team and pick a few of the best ones to display on the jumbotron or the CSN broadcast.

One thought on “How Can We Build Up the Wizards Fan Base?”