At the Verizon Center for a recent Wizards game, I found it odd that G-Wiz was leading the crowd in the “De-fense” chant in the fourth quarter.  Not only because G-Wiz was horribly offbeat as he banged the drum, but also because that job is usually reserved for G-Man, the more serious Wizards mascot.  When I thought about it, I couldn’t remember the last time I saw G-Man, though I’ve been to at least 12 games this season.  Something is definitely up. 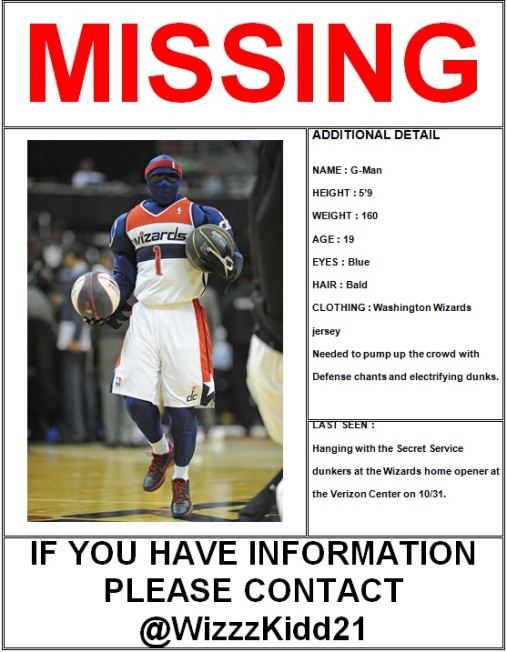 Looking through G-Wiz’s social media accounts, which he officially shares with G-Man, G-Man is surprisingly absent.  He last tweeted from the account before the season and he’s not in any pictures since then.  I remember seeing him at the arena on opening night, but I haven’t seen him at any games since then.  It’s also peculiar that G-Wiz has taken over his chant-leading duties, and that the Secret Service Dunkers are now performing without their leader.

G-Man is the perfect complement to the goofy G-Wiz.  While G-Wiz dresses up silly and picks fights with Robin Lopez, G-Man is all about business.  His toned physique reveals his discipline, and he must be one of only a few mascots that can do flip dunks.  Just two years ago, G-Man reached peak awareness, when he helped John Wall take home the Dunk Contest trophy.  And now he’s nowhere to found.

What’s behind this? Is G-Man being phased out of the organization?   Is he beefing with G-Wiz?  Is he in Randy Wittman’s doghouse?  Is in Oklahoma actively recruiting Kevin Durant? Is Robin Lopez holding him hostage? Is Ted Leonsis refusing to pay his salary? We need to start asking these questions before it’s too late and we never see G-Man again.  #freeGMan

2 thoughts on “What have they done with G-Man? #freeGMan”