After another heartbreaking and incomprehensible loss last Friday, it is time for us Wizards fans to accept our inevitable fate.  In a few weeks’ time, we’ll be watching our team’s performance in the draft lottery rather than in the first round of the NBA playoffs.  The first step to recovery is acceptance, and while we may have been trying to delude ourselves into believing we could turn things around, it’s better to now move on and begin the healing process.  But after a season of anguishing over every win and loss, how does a fan flip the switch from passionate engagement to indifferent detachment? In my experience this can be extremely difficult, especially when there are still games left to be played.  Here are some tips for dealing with the pain:

Don’t dwell: Again, the first step to recovery is accepting the facts and admitting that you’re powerless to control the situation.  So, even though the Wizards aren’t yet mathematically eliminated, and even though Detroit still has a tough schedule to close out the season, we have to come to terms with the fact that we’re not making the playoffs regardless.  Even if we do miraculously go on an 8 game win streak, we all know that’s just a setup for us to lose by 30 in the season finale and miss the playoffs by a game.  It’s better to move on now then to keep tormenting ourselves with revitalized hopes that only turn into dashed dreams.

Along with this, it’s important not to dwell on how close we came or how things could have been different.  Sure, a handful of made free throws here or there could have us in the driver seat for a playoff spot.  But reminiscing on those close calls isn’t going to change the box score, and will only serve to torment you further.  Instead, let it go; clear your mind of what could have, would have, or should have been.

Look For Silver Linings: Another key to staying positive despite the abysmal results of this season is to look for a silver lining.  In the case of the Wizards, the biggest positive of this season will be us firing Randy Wittman.  Wittman has done a good job in resurrecting the team from being the laughingstock of the league, but the time has come for him to go.  The players clearly are no longer responding to him, and the team is underachieving under his guidance.  While Wittman has been a good stopgap, the team will never reach its ultimate goal with him at the head.  Had the Wizards made the playoffs, Ted Leonsis might have convinced himself that three consecutive postseason berths warranted keeping, or worse yet, extending Randy’s contract.  From that perspective, if the cost of getting rid of Randy Wittman was missing the playoffs, then maybe this poor season was worth it.

Retroactively Revise Your Preseason Projections: Comparing where the Wizards are now to where we thought they’d end up back at the beginning of the season puts into perspective how much of a colossal let-down this year has truly been.  To minimize your misery, it’s probably best to wipe these expectations from your memory, or even go a step further and misremember them as being lower.  Looking back through my Twitter feed, I honestly thought this team would win 51 games this year, a heart-breaking fact.  For purposes of consoling myself, I’m changing that number to 41.  Now, looking from the through the eyes of a fan expecting 41 wins, this season wasn’t such an epic failure and only moderately disappointing.  I’m feeling better already. 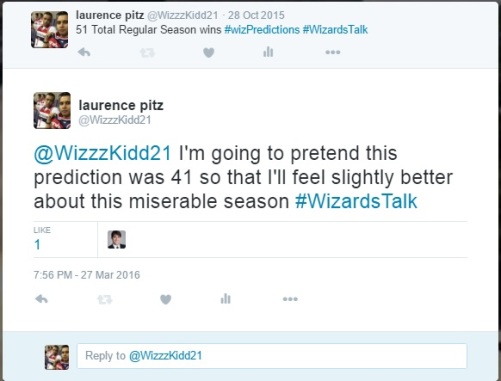 Conveniently Forget  How Much Trash You’ve Talked:  If you’re like me, you talk a lot of trash to other NBA fans during the regular season.  All year long I was bragging about every win, telling everyone how much better the WizKids were than their team, and insisting we’d turn the season around despite our poor record.  Now that our season is effectively over, it’s time to do a complete 180: keep quiet, avoid any basketball conversations with those same fans you shit-talked, and pretend like you never cared in the first place.  There’s no good comeback when your team is losing, so it’s best to keep your mouth shut.

This season, my good friend and Hornets fan has been a primary target of shit-talk. Every day I had a smart comment for her about Jeremy Lin’s stupid hair or an insulting hashtag.  But now that they’re surging and we’re sucking, she’d be lucky to get two words out of me about NBA basketball.  I’m just going to lie low and wait until next season tips off, when I’ll be right back running my mouth off in her ear with several months’ worth of new jokes and insults.

Look to play spoiler: Now that we’ve fallen dramatically short of our aspirations, the only way to still watch Wizards games without being completely depressed is to root for our team to ruin other teams’ aspirations.  If we can’t have things, then no one can.  Root for upsets, spoilers, and streak busters.  This gives us a reason to stay engaged in rooting for the Wizards to win these last few games.  And the more bitter we can make other fan bases, the better.  Let’s embarrass Kobe in one of the final home games of his career. Let’s end the Warrior’s home win streak and hurt their bid at the regular season record.  Let’s spoil Blake Griffin’s return to the Clippers.  Let’s keep the Hornets from winning home court advantage for the playoffs, and then let’s do the same thing to the Hawks.

Enjoy Clearance Sales on Merchandise: The end of the season is always a good time to buy team apparel and merchandise for cheap, and with the Wizards missing the playoffs we can expect especially good sales.  Retail stores in DC don’t routinely stock up on Wizards gear, and they’ve only recently increased inventory now that football is over and the NBA playoffs are almost set to begin.  But with our season coming to an abrupt halt, retailers are going to have to offer massive discounts to sell off their Wizards stuff to clear their shelves in time for Nationals season.  As fans that support the team even when they’re not trending, this is an opportunity to pick up Wizards swag for pennies on the dollar.  Just try not to buy gear branded for players who might not be here next year.

Attend the Last Home Game and Bring a Good Sign: The regular season home finale is always a fun game to go to.  But when your team is certain to miss the playoffs, attendance at this game is essentially mandatory.  There won’t be Wizards basketball for six plus months, so take advantage of this final opportunity to watch the team.  Being at the final game also lets you get some closure on the season.  This is where you demonstrate your love (or hate) for different stakeholders in the organization.  I’ll be there to boo Randy Wittman one last time during his introduction, and to give John a standing ovation when he comes out of the game for the final time this season.  What will make this experience even better is bringing a well-constructed and carefully thought-out sign that sums up your feelings to the whole stadium.  Personally I’m working on several ideas (stay tuned for more.) 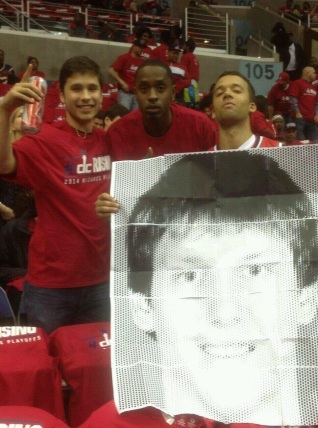 This Wizards season sucked.  That’s plain and simple and there’s no other way to look at it.  The only thing we can do is make the best of what we’ve been given and squeeze whatever fun we can out of these last few games.  These steps won’t make the season any less depressing, but they’ll help us Wizards fans come to grips with our sad reality and move forward.  Until next year, when we’ll probably do the same thing all over again.